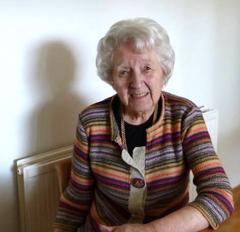 When caring for my mother in the later stages of her dementia, my sister and I instinctively knew that her appearance still mattered for her self-esteem, dignity and identity. She had always been a stylish and well-dressed lady and so it was important to help her retain that.

We ensured that even when her clothing needed protecting from spills when eating, that she wore attractive, specially designed Dining Draprons® rather than ugly disposable bibs. What we also came to realise was that it wasn’t just important for her, it was important for us too – it helped us and our siblings maintain our connection to Mum and treat her with love and respect.

What we hadn’t appreciated to begin with was that clothing also helped maintain connection and communication by becoming a topic we could use for conversation and an ‘Invitations To Respond’ – a communication method, pioneered by the Empowered Conversations team that I have recently become involved with, that encourages the use of open statements rather than direct questions to enhance communication with loved ones living with dementia.

The subject of clothing lends itself well to ‘Invitation To Respond’ statements -  most people have experienced the “you look lovely today” moment, or “I like the colour of your shirt”, i.e. a response to something we have worn.

We saw this happening in both directions: -

If Mum was brightly and smartly dressed people would remark how well she was looking and greet her with her name and perhaps remark on the colourful scarf she was wearing. This would bring a response from her – or at least a smile. 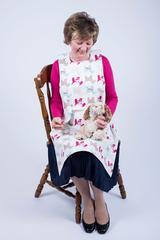 The aprons and Dining Draprons® she wore also gave opportunities for us to start conversations – for example, one had colourful Scottie dogs on and I would remark on how I loved the pink ones, or we would count how many there were. Her own response to her clothing was not always outward or directed at us – Mum would spend times just tracing and counting the shapes of the dogs or cats, or inspecting the colours of her scarf.

Mum always wore a gold necklace that my father had bought her for their golden wedding anniversary. When she was putting this on in the mornings this was always a good connecting point about how long ago it was and what a good celebration it had been or just a simple reminder of Dad.

So, there are many occasions when what the person with dementia is wearing can lead to connection and conversation without questions having to be asked.

There were other occasions where what I or my sister was wearing would bring response too. I love colour so I often turned up in a lovely bright outfit that would bring Mum a little cheer. There were also times when I had been a little outrageous in my choice of clothing and Mum would come out with “what on earth are you wearing!”. This would even happen at the time when she spoke little. I knew she was still in there when I heard this, having heard it when I was younger. She would also often straighten out or pull down my tops and jumpers.

One particularly interesting response was whilst I was helping her to shower. Sometimes I felt I needed to wear an apron, so I tried the standard institutional thin plastic type. (Like the ones district nurses will put on when they call.) Well this certainly provoked a response and although this was not always a verbal response, she was still communicating with me - she would try her hardest to rip it off.  This was not a one-off occurrence. Nearly every time I put one on she would pull hard at it. She was clearly trying to tell me that she didn’t like it at all. (I hated it too.)

I decided I needed to make my own waterproof apron – but something much more attractive. I found some PVC-coated fabric with lots of cheeky and colourful owls on it. I had no idea if it would work, but on first wearing it, it had the desired result. Its invitation to respond brought about a much friendlier interaction. My mother made no attempt to pull it off me and in fact really engaged with the owls, tracing them and pointing at them.

So, it goes to show how much our clothing can be an invitation to respond and connect and the interaction does not have to be verbal for everyone to be much happier.