When caring for our mother during the later stages of her dementia, my sister and I were determined to maintain her dignity and her identity.

Appearance, and the fact that it still matters even in later stage dementia is rarely discussed in dementia care. There is little research on this important subject, yet it can have a great effect on both the person living with dementia as well as their carer/supporter.

Appearance matters because it sends out signals and affects how people treat us. On an obvious level think about uniforms – they send out signals of identity, authority, institution etc. It is the same with all our clothing – it tells people something about you and causes judgements to be made, whether consciously or sub-consciously.

Whilst most of us have a complete package by which we are judged such as speech, use of language, dress, demeanour, facial expression and body language, those in the later stages of dementia have often lost some of these faculties. This can lead to assessment, and consequently treatment, based primarily on appearance.

When it came to having difficulty with eating there was no way that our mother was going to wear a ‘bib’. She first used a napkin but, as the need arose, she wore an apron, something she had always worn and therefore was happy to wear and still looked dignified. After observing her very carefully inspecting a pattern on one apron, I designed and made my own version where the patterns faced her rather than those looking at her; it was for her benefit, not ours. I made sure that it was an effective clothing protector with a layer of towelling, and no unnecessary ties. They were a terrific success and were certainly not called ‘bibs’. The language we use also affects a person’s dignity. Put anyone in ‘bibs and nappies’, use these names, and swiftly the person disappears!

Consider yourself in this position - which would you choose - Bib or Dignity?, Bib or drApron®?

Our dress is part of our identity and individuality and affects how others perceive us – this is no less the case, and probably more so, for people with dementia. It is important for self-esteem and self-knowledge. Often, when you look round a care home everyone starts looking the same, so it is as important to help retain the individuality of people in our care with their style as it is to take care of their eating etc. (I sometimes wonder, when people declare that ‘my mother doesn’t recognize me’ if it is also partly that they don’t recognize the person with dementia because he/she no longer has control over how they dress and do their hair etc.)

In the little research that I have found since my mother’s death - Professor Julia Twigg of Kent University found, in her studies that “dress remained significant for people with dementia”.

Our mother was a stylish lady and we always tried to keep it that way. This was as important for us as care givers as it was to Mum. Taking care of her appearance and not having her dress just for our convenience gave her dignity and it helped remind us and others that she was still Mum. Quite late on in her dementia Mum was handed a mirror when we had helped her dress and done her hair. She peered at herself and managed to declare ‘Oh I look quite normal!’. It was clearly a concern to her that although she did not feel ‘normal’ she liked to look ‘normal’. This was a time when she spoke very rarely, but how she looked obviously still meant a lot to her. 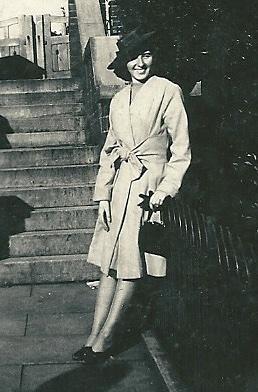 Mum in coat she made

Patsy Pope (Dementia Care Specialist from All about Dementia) agrees that “appearance has a HUGE impact on their wellbeing.” and "Get this aspect of care right and you will see them bloom with a renewed interest in their appearance and life in general."

Consider how you feel when someone says to you “you’re looking lovely today”. It is the same for a person with dementia and that greeting will be reflected leaving both care giver and receiver feeling better.

Mum – late on in her dementia

Whilst some people with dementia lose all interest in clothing, another aspect of dress is that it becomes their “environment closest in” (Twigg 2010 Clothing & Dementia: A neglected dimension). As the person loses some of their functions and their world becomes smaller the things closest to them become more important and so their clothes need to feel and look good to them. Mum demonstrated this when she was closely inspecting and smoothing down her aprons. So, as well as being attractive, I made sure her aprons were pleasant to the touch, which is not something that can be said about plastic or disposable ‘bibs’.

If you stop to think about it, if you know that your world is slipping away (and many of those with dementia do know, absolutely, what is happening to them), a sense of self is probably more important than at any other time in your life, and even if that self-recognition lasts only a few fleeting moments, the knowledge that you at least appear to be your old self, matters deeply.